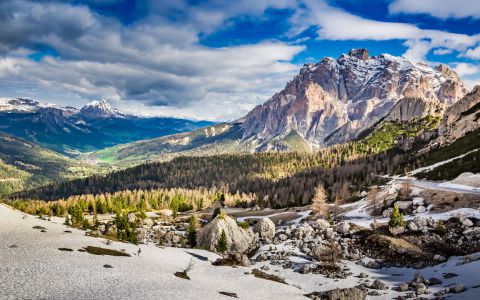 La Villa in Alta Badia
The benefits of a central location

The convenient location is undoubtedly one of the main advantages of Tlisüra Apartments and B&B in La Villa. Off the main road, but still in the very centre, with shops, bars, restaurants, ski school, ski miniclub, bus stop and tourist board, all close at hand. All of them however don't compromise the 360-degree panorama that opens from Tlisüra embracing the Fanes Group, the Gardenaccia massif, Piz la Ila and even Piz Boè.

Тhe ski slopes and the mountain lifts that connect the Gardenaccia area with the main ski carousel of Alta Badia are just a stone's throw away. Meanwhile the cable car of Piz la Ila is also easy to reach on foot. From its top station begins the famous Gran Risa, one of the most fascinating and famous ski runs of the entire resort, with turns and gradient variations worth hosting the Alpine Ski World Cup. Another ascent and you are already on the ski slopes of Sellaronda.

In summer, though, you can take advantage of the possibility to choose every day a new destination for hiking and mountain biking by simply throwing a glance from your room window instead of studying the map. The cable car of Piz la Ila and the chairlift Gardenaccia, both open from mid-June till late September, are also suitable for mountain bike transportation, offering you uncountable itineraries for every taste and every difficulty level. And for a road bike tour, just cross Tlisüra's threshold to find yourselves right on the Cat Wall (Mür dl Giat), one of the most exciting parts of the Marathon of the Dolomites (Maratona dles Dolomites)!